Ok, so in the last few articles, we focused on what the NodeMCU + Lua ecosystem could do for us; and actually, it does a great deal of stuff in a very straightforward way.

The Lua API, albeit a bit php-esque sometimes, is pretty simple to understand and to code. The Esplorer / esptool combo is not complex and can get you started on the NodeMCU in a few minutes, which is great.

But after developing quite a few production-grade devices with the Lua firmware, I began to experience some frustration over the limitations of the language and the debug capabilities:

I experienced quite a few reboots for no reason (although I think this is heap related, but well) and there is no log to tell you why it rebooted.

Sometimes the heap fills up, sometimes it empties, but that's not reproducible, non deterministic, and totally random. The same code can run for two weeks with a steady heap, and then the behavior starts to be erratic. This is weird.

At one point I wanted to test the basic functionality of the ADC0 pin. Turns out the result for adc.read() for a pin at GND was 23 while being a normal 1023 for a pin at 3.3V ... which is quite odd.

Ok, so we have an alternative (not only one though), and it sounds promising.. the Arduino IDE now supports the ESP8266 board directly !

Thanks to the guys at the ESP8266 Community forum, it works pretty well out of the box and the installation on the Arduino IDE could not be simpler.

You just have to go in the preferences (Arduino > 1.6.5) and add a new board manager url : 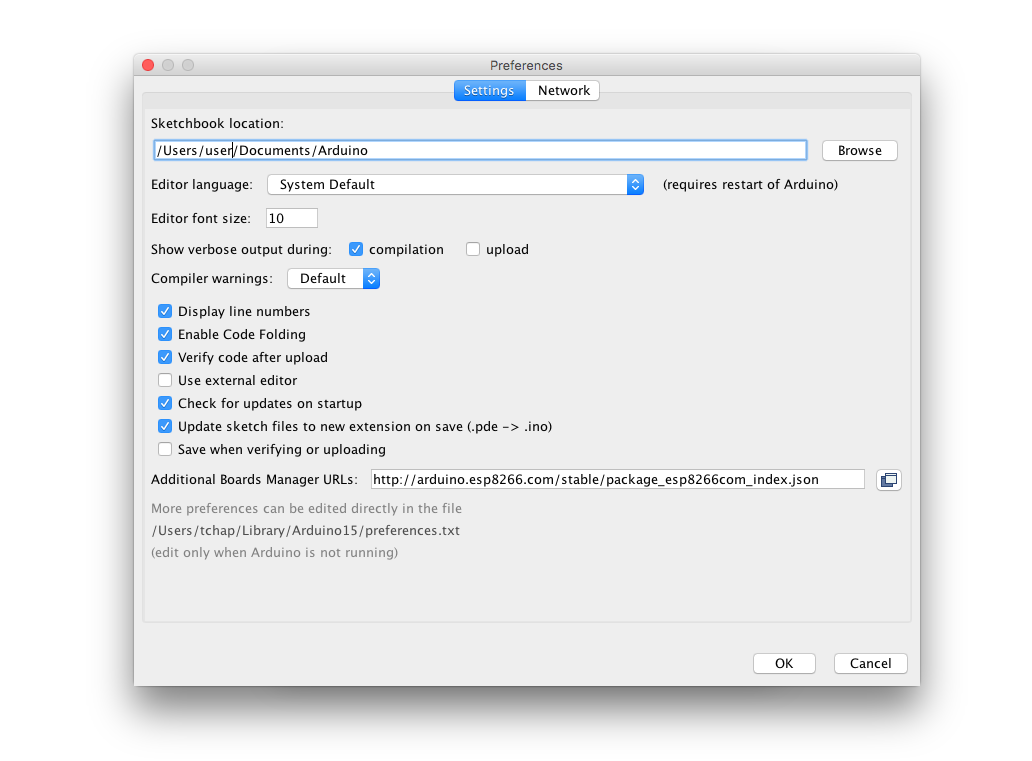 Click OK and you have your new boards ready to use : 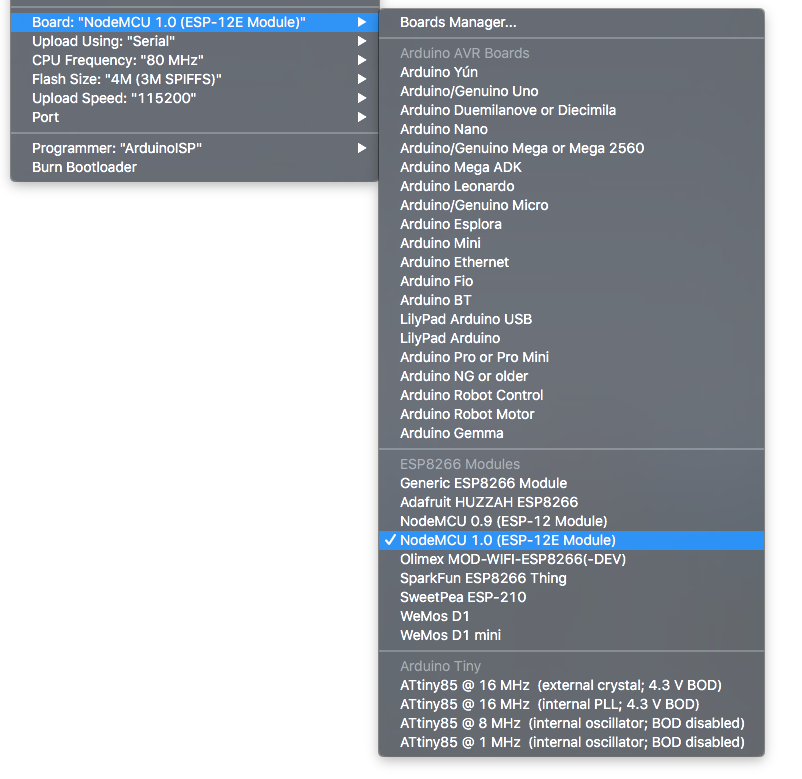 NB : you don't have to flash a specific firmware to use it with the Arduino IDE. In fact, it's the firmware that you code directly

I will redo a very simple MQTT example here to match the functionnality of the previous tutorial I did with Lua (see http://www.foobarflies.io/a-simple-connected-object-with-nodemcu-and-mqtt/).

The NodeMCU will connect to the Wifi, then connect to a broker and send regular pings, while accepting and logging messages on a specific endpoint.

Well, it's exactly like for an Arduino sketch, so it's quite straightforward if you already know the Arduino ecosystem :

Of course you'll need some libraries to make the following example. I use only one for this app : the PubSubClient from lmroy.

You can add it as easily as you would add a library for an Arduino project, I won't detail the process.

Well, we're talking C here now, so the config file is a straightforward header file config.h (for instance, you could use anything else you like) :

Here, you notice that we have a specific API for getting the ESP basic stuff. You can have a look in the source for some details on the functions available.

ESP.getChipId() is the equivalent to node.chipid() in the Lua API.

The WiFi setup is quite similar to a standard Arduino Wifi Shield code; we're setting the basics, and connecting, and looping until we have an IP:

There are a lot of variables that are not defined here for clarity (but it's in the source file, of course).

As per the previous article, the process will be :

So here we go (I included the full code):

NB : We don't use any timer here like we did in the Lua code, just a millis() check in the loop function;

The compiling process is very easy : it's the same as if you had an Arduino at hand, just click "Upload" !

The last lines should look like this, as usual :

Any compilation error should pop up in orange before that.

Testing with a desktop MQTT client

Using MQTT-Spy like we did previously, well, it works ! 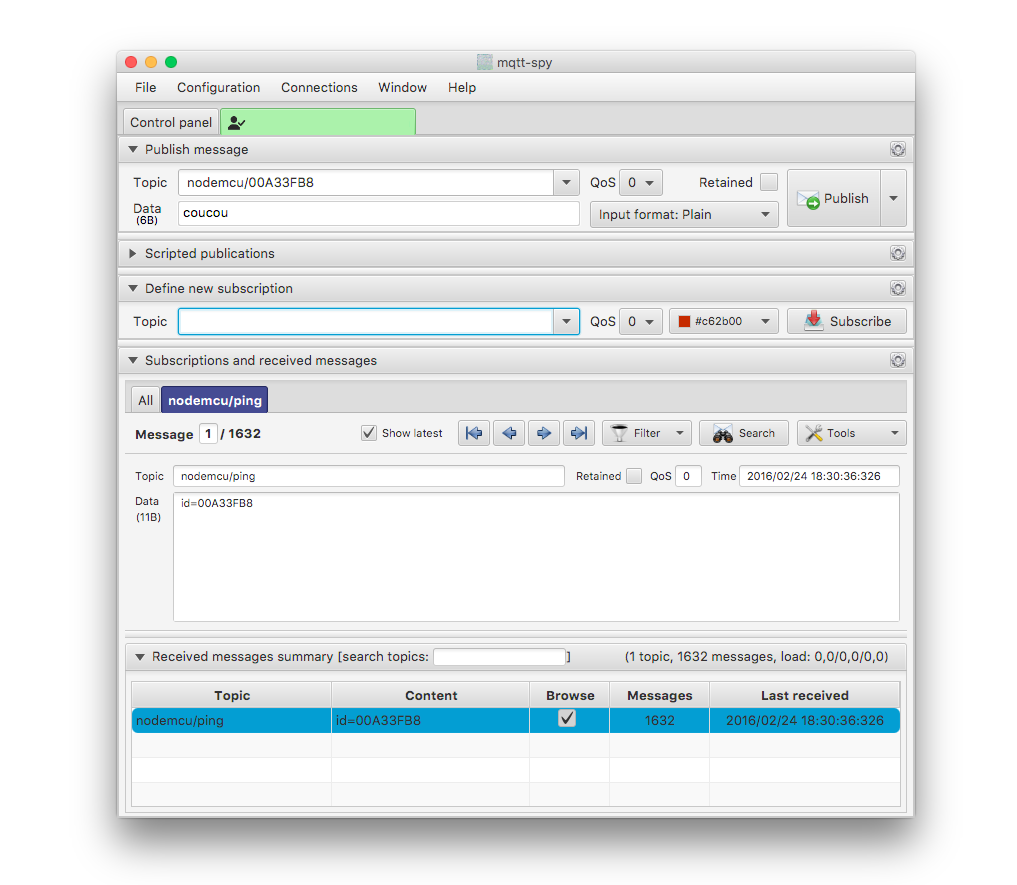 And sending coucou several times to the correct endpoint, we can open the Serial Monitor to check that everything is fine : 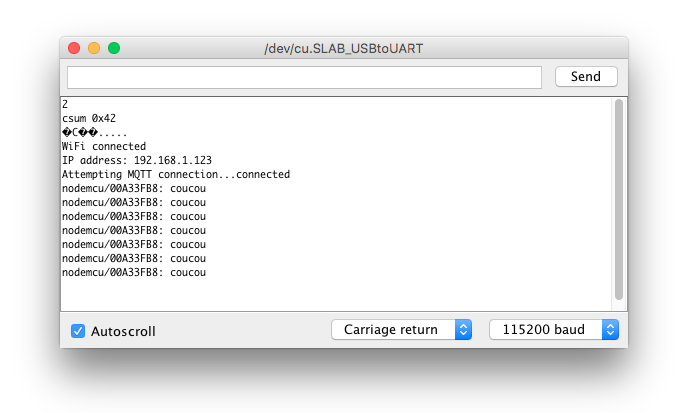 We have the exact same functionalities as my previous example, but with a few differences :

So, I'm going to try this new workflow of development for ESP8266. I know the Espressif SDK is also there somewhere with a stable reputation, but I have a feeling the Arduino IDE and the C language is the perfect combo for this chip.

It took me literally 10 minutes to rewrite the Lua example in C, so that's not a big deal, and I plan on rewriting previous Lua bits in C quite soon to test the behavior of other libs and of the pins (ADC, 1-wire, etc ...).

In the meantime, if you have experienced the same, do not hesitate to comment this post — I know Dave from http://internetofhomethings.com/ have had approximately the same problems (see here) for example.